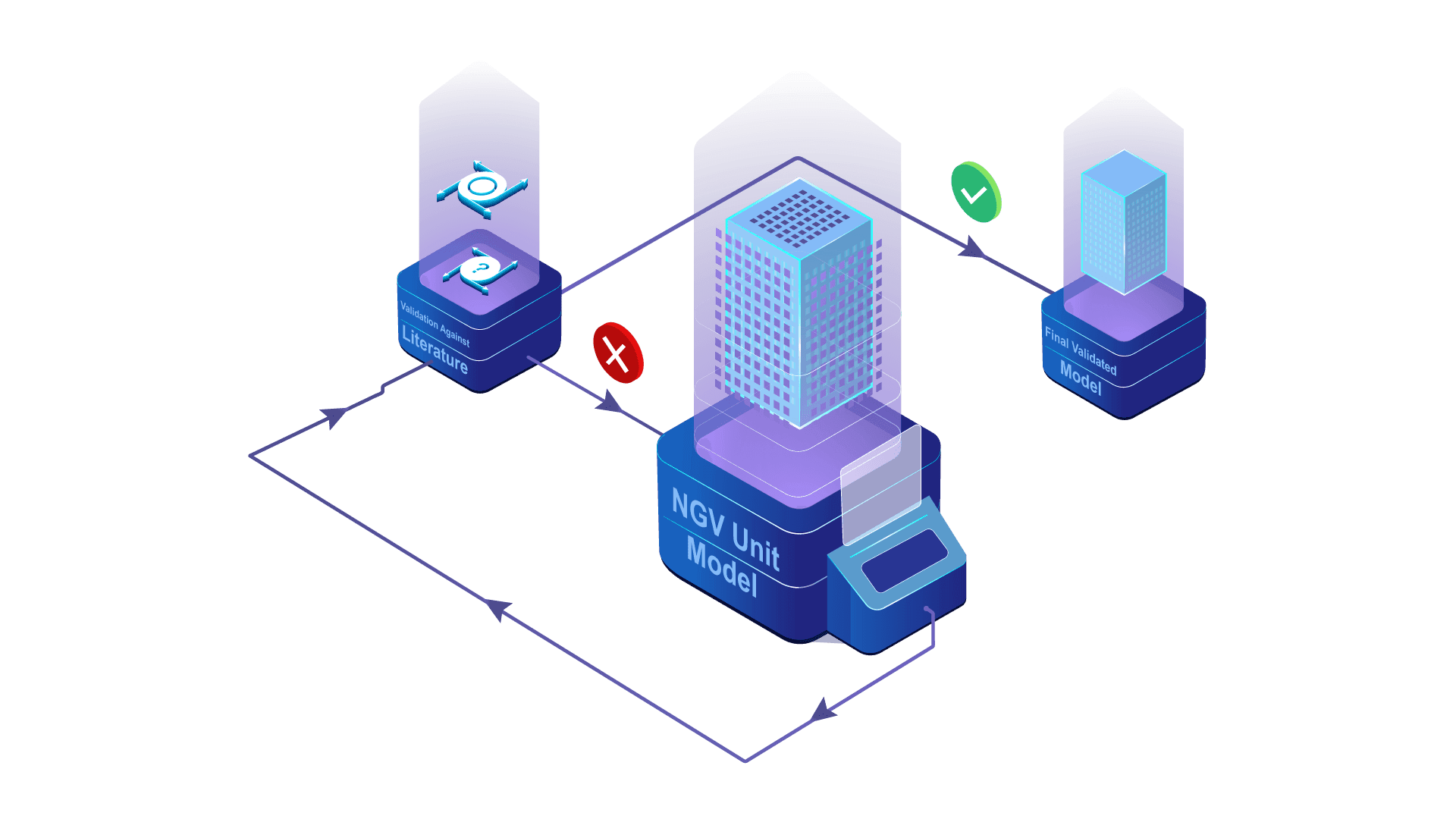 To ensure biological fidelity, we validated that input constraints could be reproduced for each step in the circuit building process and compared structural measurements with corresponding values extracted from the literature and experimental data.

We validated that input constraints could be reproduced for each step in the circuit building process and compared structural measurements with corresponding values extracted from the literature and experimental data.

Astrocytes were placed according to the densities reported in Appaix et al. (2012), measuring an average density of 12241 mm-3, ranging from 9367 mm-3 to 21479 mm-3 close to the pia. The NGV framework accurately reproduced the density distribution for the selected profile

Our placement algorithm reproduced the spacing between astrocytes, which results from their anatomically exclusive territories. We verified this orderly distribution using spatial analysis methods such as the pair correlation function and Ripley’s K-function.

Figure: Spatial analysis of the point patterns corresponding to astrocytic somata. (A) Pair correlation function. (B) Ripley’s K-function. (C) Distance distribution from each astrocytic soma to its closest neighbor, compared to the input profile (orange) from Lopez-Hidalgo et al. 2016.

During placement, the radii of the astrocytic somata were sampled from a normal distribution, which was fitted on the experimental values of astrocyte soma radii found in a multitude of studies. Soma size is taken into account while being placed so that intersections of somata with other somata and the vasculature are eliminated.

The NGV framework produced domain volumes that corresponded to juvenile astrocytic densities, capturing the magnitude of the measurements encountered in the literature.

Distance of astrocyte to vasculature

The shortest path length from the soma to the vasculature’s surface was measured to be 16 μm on average, which was in agreement with reported values (Moye et al., 2019). The relation between the surface area and thickness of the endfeet geometries validated that they agreed with the relationship from the study of (Calì et al. (2019)).

Figure: Validation of astrocytic endfeet processes. (A) Shortest path length of the endfeet perivascular processes from the surface of the astrocytic soma to the surface of the vasculature. (B) Comparison of the average path length in the NGV (salmon) to the values reported by Moye et al., 2019 (turquoise). (C) Relationship between endfeet surface areas and thicknesses in the NGV circuit (salmon) and in the work of Cali et al., 2020 (turquoise).

Studies using chemical fixation for their tissues reported a 70% − 100% coverage of the vasculature by perivascular endfeet. However, Korogod et al., (2015) showed that chemical fixation induces swelling of the astrocytic compartment, leading to increased coverage. They reported 62.9 ± 1.5% vascular coverage by astrocytic endfeet using anatomy-preserving tissue fixation. We reproduced a ~60% (Figure 4L) vascular coverage by pruning the meshes using a Gaussian surface area distribution with a mean of 225 μm2 (Calì et al., 2019).

In the NGV circuit, the number of perivascular processes was constrained for juvenile rodents at 2 ± 1 processes. The number of primary processes in the NGV was measured as 8 ± 1 processes. We validated the spatial relationship between neurons and astrocytes, by measuring the distance to the closest neuronal soma. The distribution falls within the range of literature observations, that is from 5 µm to 30 µm for three types of inhibitory neurons (Refaeli et al., 2020).

Figure: Validation of astrocytic processes and association with neurons. (A) Average number of processes (primary and perisynaptic) per astrocyte for the NGV circuit (salmon) and literature sources (turquoise). (B) Histogram of the distances for each astrocytic soma to the closest neuronal soma.

We validated the synthesized astrocytes against the experimental reconstructions in terms of morphological features and branching topology.

To validate the astrocytic component of the NGV circuit, we randomly selected six non-boundary synthesized astrocyte representatives from each layer. Morphometrics were extracted from these uniquely grown morphologies and were compared against those of the experimentally reconstructed astrocytes. The selection of morphometric features consisted of the number and length of sections, the section radial, path distances and branch orders, the remote bifurcation angles, and the segment radii and volumes.

Figure: The topological distance of each layer’s persistence diagram compared to the bio (black continuous line) and its respective standard error (black dashed line). (G, H) Validation of cumulative process surface area and volume as a function of the radial distance from the soma between circuit astrocytes (orange) and bio (blue).