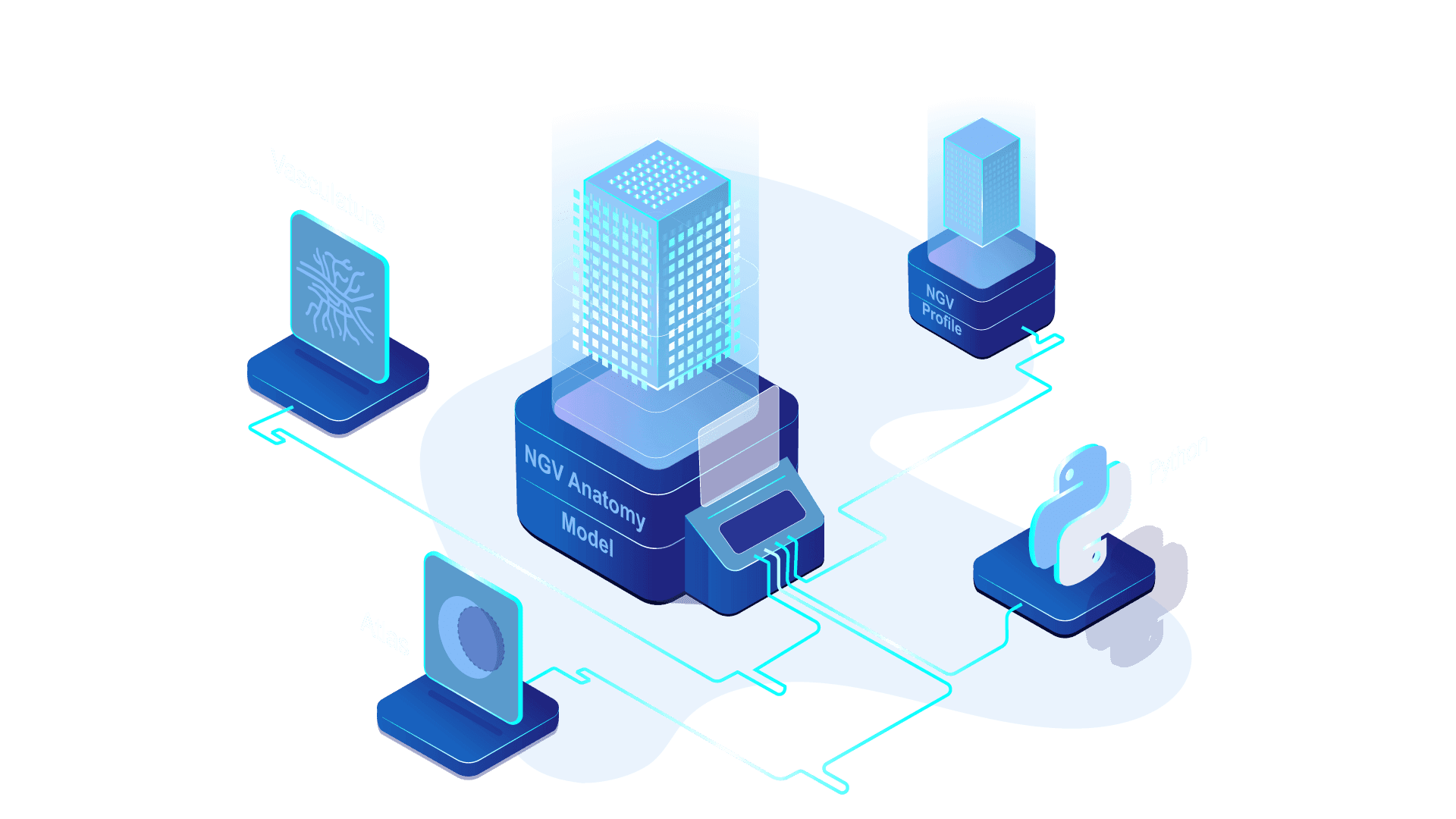 The NGV anatomy model is reconstructed using the NGV circuit building framework, written in Python, using a component-based design. A component is defined as a standalone processing step with strictly-defined inputs and outputs. The execution of a component may depend on the output files of more than one other components. This relationship between components results in an acyclic graph of dependencies (DAG), which is managed by the Snakemake workflow engine (Köster and Rahmann, 2012).

There are three main datasets in the NGV digital reconstruction: the neuronal, glial, and vascular datasets linked together with pairwise connectivities. The neuronal circuit was generated using the pipeline published in Markram et al., 2015. Protoplasmic astrocytes were placed and grown in the space populated by the vasculature and neurons. Their processes reached the vascular surface and linked with neuronal synapses. A total of 14,402 astrocytes occupied the bounding region, co-localized with 88,541 neurons and 1.37 m of vasculature wiring. The central microcircuit consisted of 15,888 neurons, 2,469 astrocytes, and 0.23 m of the vasculature, occupying a volume of 0.2 mm3.

The movie shows the three main datasets that comprise the NGV, neurons, protoplasmic astrocytes and the microvasculature. In addition, it shows the steps of the building process from the placement of the astrocytic somata to the morphology generation.

Explore the NGV reconstructions interactively in your browser in 3D.

Neuronal neocortical circuits of the somatosensory cortex of the juvenile rat were algorithmically generated based on the circuit building framework that was previously published by Markram et al. (2015). In this work the input neocortical mesocircuit consisted of a central microcircuit, occupying a volume of 0.28 mm3, with 23,590 neurons surrounded by six satellite microcircuits of 139,992 neurons in total. The overlapping arbors of neuronal morphologies formed ~8 million connections with ~37 million synapses, constituting the basis of the neuronal component of the NGV networks and providing the synaptic locations that are required from the NGV connectome.

Although most of the steps in the circuit building pipeline use the skeletonized representation of the cerebral microvasculature, the generation of endfeet appositions on the surface of the vasculature requires a more detailed representation of the surface geometry. Thus, starting from the skeletonized dataset we reconstructed a triangular discretization of the surface geometry with variable resolution. The surface mesh was generated based on implicit structures, known as metaobjects (Abdellah et al., 2020, Oeltze & Preim, 2004) which allowed the creation of highly-detailed meshes of vasculature datasets (Figure D-F).

We first placed astrocytic somata in space, matching the experimental distributions of cell density and dispersion. Previous placement algorithms placed cells with respect to their density (across layers and brain regions). However, astrocytic spacing results in a spacing that is not uniform and depends on animal species and age. Therefore, in the NGV model we distributed somata taking into account both the astrocytic density but also the distances between them. Moreover, the astrocytic somata were placed without colliding with the vascular geometry.

The morphologies of protoplasmic astrocytes reach out and contact neighboring astrocytes. As they grow one against the other they tile the cortical space forming anatomically exclusive regions.

We modeled this organization as polygons, which we generated using mathematical tessellations. Each region represented the accessible space for each astrocyte.

We reconstructed three types of connectivities:

For their establishment, the microdomain tessellation determined the available region of each astrocyte. Therefore, the vasculature sites and the synapses each astrocyte can project to, are limited to its interior.

To establish the connectivity between astrocytes and the vasculature, we first distributed potential targets on the vasculature graph and then determined which fraction of the resulting point cloud was included in each microdomain polygon. Based on literature data, each astrocyte was assigned a number of endfeet, ranging from 1 to 5 and the endfeet sites were selected according to the following observations from experimental astrocyte reconstructions:

Similarly, neuroglial connectivity was determined by first finding the synapses within each microdomain. Then a 60% random subset was selected to match the experimental observations.

Finally, gap junctions between neighboring astrocytes were determined as touches between the colliding morphologies of the grown astrocytes, using the process of touch-detection as presented in (Markram et al., 2015).

Figure: Illustrations of the connectivity in the NGV circuit. (A) Astrocytic somata (turquoise), vasculature (red) and biased random walks (green) connecting the somata to the surface targets on the vasculature. (B) Connectivity to potential targets distributed on the vasculature and on a single artery (C). (D) Glial-glial connections (green) between an astrocyte and all its neighbors. (E) Synapses (red) that are contained into a single microdomain, surrounded by its neighbors.

The surface geometry of the endfeet wrapping around the vasculature was generated from the positions on the surface of the vasculature, which have previously been assigned in the gliovascular connectivity step. From each endfoot target site, the endfeet area was grown isotropically on the vessel surface until it collided with another endfoot area or reached a maximum radius.

The growth is considered competitive because all the endfeet are growing simultaneously restricting the area they are grown into, from neighboring endfeet. After the simulation has converged we pruned the overshoot surfaces so that they matched the experimental distribution of endfeet areas.

The final stage was to grow stochastic astroglial morphologies, constrained by the astrocytic data produced in the previous steps. To make this possible, we developed a novel algorithm that combined topological branching and space colonization using neuronal synapses as attraction seeds. This allowed us to grow in-silico, unique astrocytic morphologies that were embedded in space, projecting to the vasculature forming endfeet and encapsulating the synapses in their microdomains.

To launch the astrocyte analysis Jupyter notebook in your browser using MyBinder, click the badge

Figure: Examples of synthesized astrocytes.
Figure: Illustrations of the circuit with the grown morphologies. (A) Overview of the astrocytic circuit. (B) A group of five astrocytes with their endfeet. (C) Closeup of a single astrocytic morphology and its endfoot on the surface of the vasculature.

MorphIO can be installed via pip:

and used in python: